Several tours to choose from! Which do you prefer? 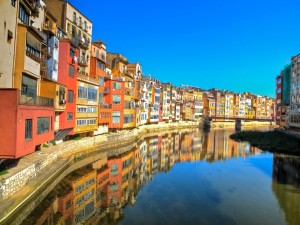 Tour to Girona. Located 43 km from Palamos, the capital of the province and the region of Gironés , its origins date back to the 77 th . C. when Pompey built an oppidum on the Via Heraclea and the Roman occupiers originally founded Gerona , called in latin Gerunda . The city is crossed by Ter, Guell, Onar and Galligants and rivers , at an altitude of 75 m above sea level. The Barri Vell is one of the most evocative of Catalonia , with only monumental elements in Europe. It is bounded on the east by the so-called Paseo de la Muralla, the coastal path of the old Carolingian walls (IX ) and the lower Middle Ages (XIV and XV). Its monuments include the Call ( old Jewish neighborhood of the best preserved in Spain ); as well as the famous colorful houses Onar , and atop the Cathedral, a grand nave , which is the widest in the world in gothic style.

Will conduct a walk through the old town about 2 hours. The journey takes us through the neighborhood of Sant Pere, arround the walls, the Jewish neighborhood, the Cathedral. Climbing stairs will visit this impressive Gothic cathedral nave and a lovely cloister. 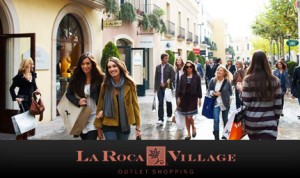 Near to Palamos, we found La Roca Village is the best destination for shopping . It offers the leading brands in design and exceptional prices unmatched elsewhere . Designed in a typical architectural style of the last century Catalan village , La Roca Village allows you to walk among all the stores in the same mall , making shopping a pleasurable experience it should be. There is even a children’s play area , restaurants and cafes of traditional Catalan cuisine. The Rock is fun for everyone!
It’s a complete shopping experience , with major fashion brands , sports shop , household items and children’s stores offering discounts of up to 60 % on normal retail price elsewhere. You can find a lot of brands , including Custo Barcelona and catalan Lupo Bags . You’ll also find the best Spanish brands like Bimba & Lola and Camper among international designer boutiques such as Bikkembergs, Armani, Burberry, Loewe, La Martina, Lacoste, Guess, Hoss Intropia, Ralph Lauren and Hugo Boss .
La Roca Village offers the service of a personal shopper , a person with good eye that can help you choose a perfect gift for that special occasion or to change your whole wardrobe attire.

This really is to make shopping fun and easy way ! 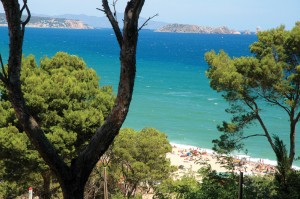 Tour to the most beautiful areas of the Costa Brava. The first visit is the medieval village of Pals. With various prizes awarded ( including national fine arts and tourism medal of honor awarded by the Generalitat de Catalunya ) , Gothic campus Pals stands as one of the best preserved in the country. This medieval set badly damaged as a result of the Spanish civil war, began its restoration in 1948 and lasted for the next 30 years . Today its architectural beauty and its people initiatives make the place one of the most visited places . Pals has a historic medieval center where the Romanesque tower built between the eleventh and thirteenth centuries, known as the Tower of the Hours.
Within the Gothic Quarter of the town we can see cobblestone streets and arches , façades with pointed windows and stone balconies . The town wall contains four square towers which date from the fourth century. The Josep Pla viewpoint ( from which can be seen the fields of Empordà and the Medes Islands ) , the Plaça Major, the tombs in the main street and the church of Sant Pere are other tourist spots of the city .
After the visit, continue route to reach the typical village of Calella de Palafrugell, fishing village on a rocky coastline dotted with small coves situated on the Costa Brava, a picturesque town that retains the old charm of the villages in the area before the advent of tourism. 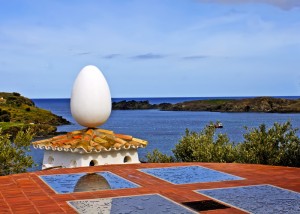 Out of northern region of Girona towards l’ Alt Empordà and the town of Figueres , closely linked to the name of the genius Salvador Dalí. Visit the world famous Dalí Theatre – Museum , the largest surrealistic object in the world, occupies the building of the former Municipal Theater, nineteenth century building destroyed at the end of the civil war. On its ruins , Dalí decided to create his museum.

The artist personally took charge of the museum project , so much so that within the complex is the last room and his tomb .
As its name suggests , the building that houses the museum has something to do with a theater ; was a theater built in 1849. In 1939 , during the Spanish civil war , it was destroyed by fire , which left standing only the structure of what had been a beautiful neoclassical building . Every room , every space of the museum is a work of art , with unique combinations of paintings, sculptures , furniture, decorations and all kinds of curiosities.
In many rooms the walls and ceilings are completely covered with huge murals : some are original compositions while others are extensions of his famous paintings.
After the visit return to Palamos , making a stop in the cosmopolitan tourist town of Platja d’ Aro , where we will have free time for shopping .
Arrival in Palamos and finally our services.